-The following article appeared in the print edition of the Provo Daily Herald on June 19th and 23rd.-

For the last 40 years in and around Utah County, the name “Jackson” has been synonymous with quality, compassionate orthopedic care. Through hard work and good timing, brothers Robert, Richard, and Scott Jackson have channeled their passions for sports and helping others into the largest private independent orthopedic group in the state. Robert and Richard are now retired, and Scott is retiring next month, so it’s a good time to reﬂect on their legacy—a legacy shaped by a LaVell Edwards pep talk, opportune medical advancements, and tremendous support from the community and their care teams.

The Jacksons’ interest in the ﬁeld of orthopedics began with their love of BYU sports. In their youth, they were avid BYU fans and traveled from their home in Salt Lake City to attend nearly every BYU football game with their parents. After high school, they each attended BYU; Robert and Richard were track athletes, and Scott played basketball and tennis at BYU.

It’s no wonder we were drawn to Provo and orthopedic surgery and chose sports medicine as our specialty,” Scott says. 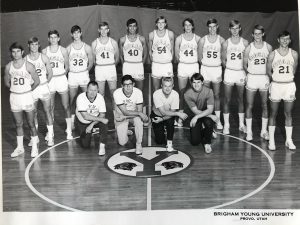 Second from the left: Scott Jackson

The Jacksons’ orthopedic legacy started in 1979 while Robert was completing his orthopedic residency at the University of Utah and moonlighting at Mountain View Hospital in Payson. Robert was considering a job near his hometown in Salt Lake City when Dr. John Mendenhall helped recruit and support his ﬁrst practice in Utah County in 1979. Richard followed in the footsteps of his twin brother and joined him in 1981.

As I began my practice in the early 1980’s the arthroscope was just being introduced,” Richard recalls. “This provided the ability to treat many joint conditions with more precision and less invasive techniques. This, in turn, generated an explosion in orthopedic technologies and led to sub-specialization in multiple areas of orthopedics.

Along with Dr. Mendenhall and Dr. Devon Nelson, Robert and Richard established a clinic in Springville and worked primarily in the south part of Utah county.

Scott had a rather unusual ﬁrst day when he joined his brothers’ clinic. When he arrived for his ﬁrst day in December 1989, Richard had gone to cover BYU football’s Holiday Bowl and forgotten to cancel his scheduled patients in the office. So, Richard’s patients were added to Scott’s schedule, and Scott saw more than 50 patients during his ﬁrst day in practice. Talk about sink or swim!

The three brothers and their partners continued to treat patients in Utah county as well as many outreach clinics throughout Utah, including Nephi, Price, Gunnison, Mount Pleasant, Ephraim, Delta, and Fillmore.

In describing their journey from Salt Lake to creating the largest private independent orthopedic group in the state, Robert says: “We were fortunate to be well-trained and in the right place at the right time.”

As time passed, the group continued to move North to Provo. The Jacksons and Dr. Nelson were privileged to be the team orthopedic surgeons for BYU athletics for ﬁfteen years beginning in 1985, which gave them many memorable moments from the sidelines. Scott recalls the following story from BYU’s game against the University of Utah in 1990:

“I was excited to hear what LaVell would tell the players in the locker room at halftime. I was shocked when his speech was just 4 words: ‘Don’t do anything stupid’. It worked! We beat them on their home ﬁeld that day. That four-word pep talk has stayed with me and been a helpful reminder at times.”

Since 1979, the population of Utah County has more than tripled and the initial group of surgeons is now known as Revere Health Orthopedics, with twenty-one physicians and thirteen PAs and NPs. “We have developed a multi-specialty group with exceptionally well-trained orthopedic surgeons who specialize in nearly every area of musculoskeletal disciplines including sports medicine, total joint reconstruction, hand, foot and ankle, spine, and trauma, to name a few,” the Jacksons say.

“Our mission has always been to provide the very best, state-of-the-art care and to always treat our patients with respect and compassion,” they continue. “The group was founded on a team approach, to include not only our orthopedic group but also other specialties. We are proud to be part of such an outstanding community of medical doctors who we consider not only our colleagues but our friends and brothers.”

As Scott prepares for retirement, the brothers wanted to express sincere gratitude to their patients and community:

“It has been an honor to have become acquainted with so many wonderful people and be entrusted with their care. We will forever be grateful and cherish the memories of serving the orthopedic needs of friends and neighbors in this outstanding and loved community.”

They also know they couldn’t have done it alone.

We express sincere thanks to office staff, hospital nursing staff, and surgical assistants who have been instrumental in enabling us to provide excellent care over the years. It is with utmost conﬁdence that we transition the care of patients to our colleagues and partners at Revere Health Orthopedics, as we feel certain they will continue to take great care of our patients and continue a standard of excellence in caring for the orthopedic needs of our community. 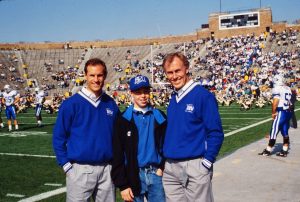 Telehealth is not appropriate for every medical concern, so it’s important to ask your provider whether a virtual visit is suitable for your needs.

Preparing for your Annual Physical Exam

Preparing for your Annual Physical Exam

Take care of your heart: Signs and Symptoms of Heart Disease in Men

Take care of your heart: Signs and Symptoms of Heart Disease in Men

This information is not intended to replace the advice of a medical professional. You should always consult your doctor before making decisions about your health.